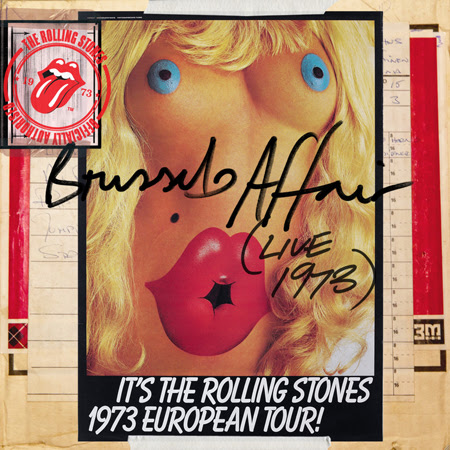 I don't spend much time plugging classic-rock bands or albums. The Who and the Stones generally don't need my help. But I will make a quick exception for something a little out-of-the-ordinary in the stunning department.

The Brussels Affair is an amazing document of a band riding the crest of a wave of awesome. This was the Mick Taylor edition of the Rolling Stones, the same one that had run off a string of records -- Let It Bleed, Sticky Fingers, Get Yer Ya-Yas Out and Exile On Main Street -- that were so five-star, drop-dead amazing that 1973's Goat's Head Soup seemed like a mediocre record in comparison at the time. If they put that one out now, it would be considered the greatest return to form ever in the history of rock and roll. Context is everything.

The Brussels Affair was recorded live in (durrr) Belgium on that 1973 Tour supporting Goat's Head Soup. Jagger does a great job on this record, but Mick isn't the real star here. It's the rest of the band that makes this so worthwhile: Charlie and Bill hunkered down, riding the groove, while Keef and Mick Taylor slash and burn over top of it. The setlist is all Beggars Banquet and thereafter. Translation: their finest stuff. And the Goat's Head Soup material that takes up the middle part of the set holds its own with the classics. As great as "Midnight Rambler" and "Gimme Shelter" are on this one, it may be the extended jam on "Heartbreaker" that stands out as the absolute winner.

This is a killer document of a band at their primal, fluid best. If you have never owned one of the many bootlegs of it that have surfaced over the years, head over to that link above and spend the paltry $4.99 that they are charging for the U.S. Or the rest of the world can head here to buy it. Get on it.

- Posted using BlogPress from my iPad
Posted by Steve Kirsch at Sunday, June 10, 2012