Ever since my paleo/primal journey followed the signs labeled Weston A. Price Foundation, I have been trying to incorporate more nutrient-dense offal into my life.

I already told you how to get yer liver on by making paleo beef-liver pate.

Now it's time to figure out the heart.

Taking the approach that all offal is best consumed for the first time with bacon, and also realizing that my otherwise awesome wife is not going to eat this stuff even with the bacon, I not only opted for the bacon addition, but I also called a mushroom audible. She doesn't dig the 'shrooms so much, but if she isn't going to eat this particular delicacy anyway, why not add them? So it went something like this....

Cook the bacon. You then need to cook the mushrooms and onions in a frying pan in either the bacon grease or butter (grassfed, please....Kerrygold is great) along with a bunch of garlic. I opted for the butter route.

Clean the heart by trimming off most of the fat and any obvious arteries from the outside. Then stuff all of the frying-pan ingredients into the heart cavity. Really stuff it full and then use toothpicks -- the longer the better -- to hold it together.

Put the stuffed heart in the crockpot along with the broth and olive oil and some more garlic.

Cook for 11-12 hours on low. Don't skimp on the cooking time, or else you risk ending up with tough rubbery meat. Mine turned out pretty fantastic.

This was my first foray into beef heart. And what does the heart taste like, you ask? Really lean beef. It's so lean, in fact, that I might use coconut milk instead of beef broth/olive oil as the cooking liquid and add chili peppers, cumin or curry along with the garlic in that liquid just to spice things up a little more. The stuffing was *perfect* though. Bacon, mushrooms and onions are a killer combo.

Sliced up after all the cooking and dumped into a pot with lots of the bacon/mushroom/onion goop dumped on top, it looks something like this: 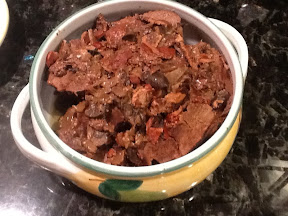 The offal train rolls on....get on board.

- Posted using BlogPress from my iPad
Posted by Steve Kirsch at Thursday, February 16, 2012