"KABOOM -- Embracing the Suck in a Savage Little War" 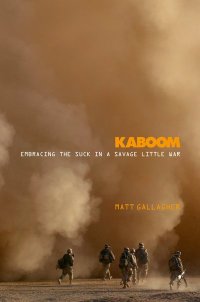 War books are a dicey proposition, especially any book about an ongoing conflict. Almost always, it seems, the author has a political ax to grind. And, really, I bet you already know how you feel about the political aspects of the Iraq war; so, doubtless, you don't need a book to help you collect your thoughts from that standpoint. By and large, I end up shying away from war books as a result.

But ever since I was transfixed by Sebastian Junger's book War and its companion movie Restrepo -- both about the current Afghanistan war -- I made an exception to the above rule. I'll still read a war book, even about a current war, as long it ditches the politics, and, instead, tells me about the soldiers involved. Because if there's one thing that gets lost in pro- and anti-war writing, it's the soldiers. And if there's one rule of life that always holds true, people are always more interesting than politics.

Junger did a hell of a job with War, getting inside the inner workings of life and death in a platoon in the deadly Korengal valley, and Restrepo brought that tale further to life, but, despite the beauty and starkness of those works, I think Matt Gallagher's done one better with his story of his time as an Army lieutenant in Iraq. KABOOM -- Embracing the Suck in a Savage Little War is exactly what it purports to be, a tale, free of pro- and anti-war politics, about the day-to-day grind, and about trying to find those little moments of zen or even, dare I say it, fun amidst the madness. And, most of all, it's about the people -- from soldiers like Specialist Haitian Sensation to PFC Das Boot to Sergeant Big Ern to Corporal Hot Wheels, and even including local Iraqis who are given faces and names and an insight into their feelings that no 24-hour-news-cycle reporter on a big cable channel will ever show you.

Oh, and there's still politics here, but it's military politics -- the divisions between the guys at the combat outposts and the ones back at the forward operating bases (FOBs), or between Gallagher and one of his superior officers after the author posts something on a blog that wasn't properly cleared through the right channels. The FOB guys, the "fobbits,"are seen as soft, not really participating in the daily madness of the war's "fucking frago"--short for "fragmentary order," or what we civilians might just call a clusterfuck. But it's an ongoing, constantly-changing clusterfuck. "Change was the norm, and this norm was called a frago," Gallagher writes. And this book is all about embracing that frago, and finding, somewhere hidden in there, the joy of being alive, the incomparable bonds that develop between soldiers in the thick of a war and the satisfaction that comes when smart, competent people work together toward a goal, even if that goal might be unattainable in the end.

I like to think that, as I did, any reader would finish this book with a profound respect for these soldiers, no matter how much one opposes the war they are fighting in. And that respect comes along with more than a few moments of laughing so hard you're crying from various stories: of the exploits of the unit's 300-pound polygamist Iraqi interpreter (nickname: "Suge Knight"); of shady, but essential, local leaders with nicknames like "Sheik Banana Hands" who obviously, in the end, had loyalties to no one but themselves; of energy-drink consumption at hallucinatory levels, to fight off exhaustion from sleep-deprivation at near death-inducing levels; and of the proper technique for turning your drink bottle into a urinal, and the proper amount of laughter and verbal abuse to rain down upon the guy who does not follow those instructions properly.

You hear the line all the time about supporting the troops no matter what you think of the war, and it's a laudable concept, but until I read this book and War, I don't think I really had any clue what these soldiers are experiencing on a day-to-day basis. We owe them our gratitude and admiration, no matter what you think of the orders they are being given.
Posted by Steve Kirsch at Friday, January 21, 2011