Lamb tagine, in a crockpot. A stolen/modified recipe. Plus broth!

In recent years, I've tried to expand my spice repertoire in the kitchen to include a lot more Middle-Eastern/Mediterranean flavors. Thanks to Melissa Joulwan, and her Well Fed series of cookbooks, I've found myself using things like cinnamon, allspice, turmeric and cumin to flavor roasts and pans full of ground beef or lamb (both always from grassfed animals.... always!). It's crazy delicious and it deceptively makes the kitchen smell exotic, and like I know what I'm doing in there.

I also love crockpots. They help me get shit done. And I am all about getting shit done. Spend hours in the kitchen cooking, stirring, etc. or... throw a bunch of ingredients into the slow cooker, go do all the other things I have to do for ten hours and then enjoy? That seems like an easy choice. But there are definitely texture issues with crockpot cooking that make it more appropriate if you are looking for something more on the sloppy/stew/pulled-pork end of things than something drier and more well-defined. There are some (OK, many) recipes that just don't convert well to a crockpot, unless you are willing to deal with a major texture change in the result.

But then there's this one. Russ Crandall has a great blog called The Domestic Man, and I recently ran across his recipe for a stovetop lamb tagine. Lamb tagine is a Moroccan lamb stew. It's flavored with a lot of the spices that I have already been experimenting with in the kitchen. It is stupidly delicious, at least in the versions that I have had in restaurants.

But Russ's recipe frankly involves more time than I want to spend in the kitchen. There's a marinade in his. That would require me to remember to marinate the lamb in advance. You may recall that I have shit to do. That advance-marinating stuff? It's not going to happen. I know me. Quite well, actually.

Then his recipe involves "browning" the lamb in "batches." I don't brown in batches. I have shit to do.

So.... I thought to myself, "Self, if his recipe ends up with a pot of stewy deliciousness, and that's what my crockpot always provides me, why oh why, self, are you contemplating driving yourself batshit crazy with marinades and browning and other chef-y hoohah when you likely will be immensely satisfied if you just turn this thing into a slow-cooker tagine?"

I find it counterproductive to argue with myself when I'm making this much sense. So I decided to crockpot-i-fy this recipe.

(And let me digress for a moment and say that if I were Russ Crandall and someone took my beautifully constructed stovetop lamb-tagine recipe -- which, seriously, just has to taste seventy-five times better than what some drummer in New Jersey threw into a crockpot -- and turned it into a 15-minute exercise in "get me out of the kitchen as fast as possible" meal prep, I'd likely regard it as savagery that has no actual relation to "cooking" at all. And I'd be right. Or he'd be right. Or something. But my recipes, or, in this case, my conversion of his recipe into something much easier, is not for frou-frou occasions, or attempts to impress someone that you really want to dazzle with your inner Anthony Bourdain. My recipes are all about easy. Just so we're clear.... New hot person you are just getting to know and are trying to impress with kitchen skills so you can move onward to deploying another skill set in the less-clothed department? Use Russ's recipe. Feeding your family on a Tuesday when you have other shit to get done? You might want to try this.)

This is really easy.

I went to Whole Foods, because they have grassfed lamb, to the portion of the counter labeled "Viking cuts of meat" and pointed to a five-pound-ish slab of bone-in lamb leg that would have made Thor tremble in anticipation of deliciousness. I asked Meat Dude if he would cut it in half so it would actually fit in my crockpot. He did. (Thank you, Meat Dude. It was kind-of crowded, and I appreciate it). I put the lamb into the crockpot. I assembled all the spices from Russ's recipe, except no paprika because my wife still mostly follows the autoimmune protocol. I doubled most of them because I find that crockpot recipes just need more spice. Because science (or something).

I added extra apricots and dates because that sounded delicious. I added extra carrots for the same reason. I used his amount of broth because I didn't want it to get too soupy. I skipped raisins. Because raisins are stupid. Or maybe because I forgot to buy them.

Put all the ingredients in the crockpot on top of/around the lamb. It looks like this: 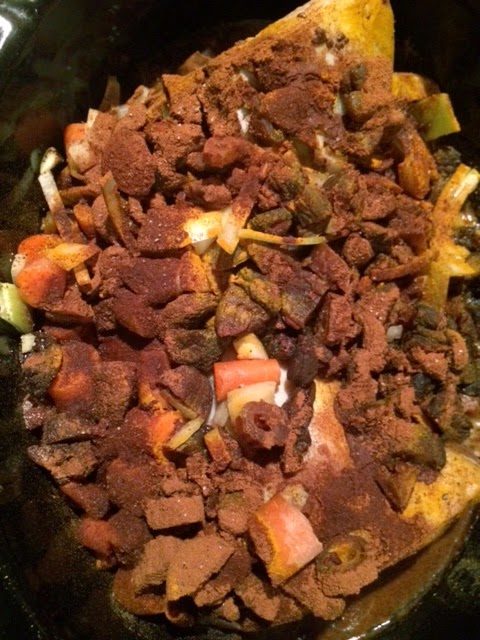 Turn the crockpot on low for 10-12 hours. It'll look like this when it's done: Make appropriate noises of joy when eating it. It is that crazy delicious. Oh, and eat some vegetables with it too. Six carrots is not enough.

That means I filled up the crockpot, that already had the bones and slop in there, with water. I cooked it on low for another 24 hours. The resulting broth, after appropriate straining of bones and goop, looks like very black coffee. It is strong-tasting enough that if it were listed on a menu, you would find it somewhere on the pages labeled either "badass" or "foolish." If you are one of those people that gets his or her babypants all in a knot over how "strong" beef broth is and you can only handle chicken broth, do not even bother with this lamb broth. It is some serious Viking shit. It will scare you and your children. It's also a bit on the sweet side, so I might not want it first thing in the morning. It seems more like an evening sort of sipping substance.

I firmly believe, with no scientific evidence to prove it, that this broth cures many illnesses and prevents even more from ever starting. Germs run from this broth with fear in their little germ eyes.

Sadly, you may too. It's that strong. Caveat emptor (eator?) and all that. Enjoy. Or don't. Your call.