The "great-great-grandma's kitchen" test. Or how we've seriously lost the calibration on our "gross-out" meter.

The other day on Facebook, I saw a friend's wife note that in their kitchen at the time was a "cow's femur" marinating and a "cow's rotator cuff" in a crockpot. You real-food aficionados will immediately recognize the latter as bone broth cooking and the former as some sort of prep for later meaty deliciousness.

And I am sure -- because I've seen it happen -- if the original post had referenced how, instead, there was a frozen pizza and some processed cookie dough in the oven, the commentary would have been entirely of the "Yum!" variety.

Let me give you a clue: You are too-easily grossed-out. We've forgotten how to cook. And our tolerance for the "grossness" of what actually is just plain food is at an all-time low.

When your great-great grandmother made soup -- and what is bone broth but soup, anyway?** -- she didn't open a can of some crap and heat it in the microwave; she put some bones in water with some salt, pepper, spices and vegetables. She cooked it all day, and maybe all night too. It looked "gross" and it tasted like the nectar of the gods. When she had a "cow's femur," she marinated and slow-cooked it, and from that pile of meat and bone came something amazing. It was worth the wait.

Now, too many of us buy processed slop from the middle aisles of the supermarket, where the ingredient lists are so long that they just get ignored by the very folks -- the consumers - for whose benefit those lists allegedly exist. And we "prepare" meals so regularly by opening packages and heating up the contents that we have forgotten that real food isn't cooked like that.

So I propose something simple: the "great-great-grandma's kitchen test." If she wouldn't have cooked it, because she wouldn't have known what the hell it is, then you shouldn't either because it isn't real food. And if she would cook it, then it likely is nothing but real food. Gross? Maybe you need to recalibrate your sensibilities, buttercup. That's how real food is made, and that other stuff? It may not look gross to you, but it sure as hell is at the root of most of the obesity epidemic and the diseases of modern society -- most notably type-2 diabetes -- that great-great grandma wouldn't have recognized as anything more than lightning-strike rarities.

By the way, before you see this as some sort of pro-paleo rant, fuck "paleo." Other than the name of this blog, I have little invested in "paleo" perfection. What I fully support, however, is eating non-processed real food in a way that works for your body. If it's in a bag or a can or a package, it pretty likely doesn't make the real-food cut. Why? Because great-great grandma wouldn't know what the hell it was. Real food comes from real sources. It's messy and "gross" and requires some work to prepare.

Great-great grandma supports this message. Although she'd probably wash my mouth out with soap. 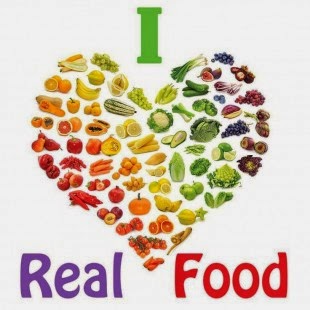